Railgate Finland in Kouvala thinks big and this is why

While most European countries are gradually preparing the network to handle 740-metre length trains, in Finland it is already possible to enter the country with trains of a 1,100 metre length. Three tracks in both directions are up and running on the Vainikkala/Buslovskaya border crossing, where Finland meets Russia.

It is is one of the advantages of Railgate Finland in Kouvala, a terminal just at an hour distance by freight train. It is not a coincidence that also here work is under construction to facilitate the extra long trains. From 2022 the new Road and Rail Terminal of the Finnish hub is operative, with the required infrastructure for the 1,100 length.

Kouvola likes to think big. “In terms of international significance, the terminal can be compared to the main ports and airports in Finland”, said Petteri Portaankorva, development director of the city of Kouvola. Indeed, it connects to Helsinki in the west, to the port of Hamina Kotka in the south and to Vainikkala in the east, all within two hours. This network is not by coincidence included in the TENT-T core network.

That traffic is following this route becomes evident from the statistics of the previous years. The border crossing of Vainikkala/Buslovskaya is the most frequented border for international freight; 4,255 thousand tonnes of cargo was forwarded along this route in 2017 alone. Russia is the most important destination of international freight and the southern border crossing the most used route into the neighbouring country.

Terminal operator Kouvola Innovation Oy has realised the importance of its terminal and has reserved a great deal of time and money to live up to its potential. The construction of the new intermodal terminal has begun in 2019. A total of 170 hectares is being constructed; the area for extra-long trains stretches 48 hectares.

“The market share of Russian related traffic from our total volumes is significant”, said Antti Pursiainen, Sales Director of national railway undertaking VR. “Daily cross-border operation is very smooth and there is continuous discussion with RZD Logistics about short-term and long-term development of the co-operation in different management levels.”

What is more, 60 per cent of all traffic between Finland and Russia is now operated paperless, he explains. The electronic consignment note has taken its place in the supply chain on this route. The region is thereby taking the lead in electronic freight handling. “This is one of the factors impacting the freight handling capacity of the route to the east”, said Pursiainen.

Since November 2017, the city of Kouvola is not only a point of departure to neighbouring Russia but also for the longer haul to China. Since November last year, 40 trains have been operated to Xi’an in the centre of China, said Nancy Li, General Director of the Scand-China International Link. The main advantage of the train link is that Finland has the same broad gauge as the CIS states, so the train only needs to switch to another railway network once, Turunen explained. The train journey takes 12 to 14 days. “The fastest we have carried out the journey is in eleven days”, said Anu Kujansuu, marketing director at Kouvola Cargo Handling Oy, the operator of the service.

“The service has a lot of potential, but the number of train departures could be more”, Pursiainen thinks. “We now run a train around four times per month, mainly carrying wood pulp to China. It is not yet a regular service. As it is still a service in one direction, a big challenge is bringing back the containers to Finland.” If everything happens according to plan, a new regular westbound blocktrain will be launched in November this year, said Kujansuu. “Last year, there were some delays in Xi’an due to congestion. Therefore, we had to wait with this service. But we can confirm that it will start this year.” 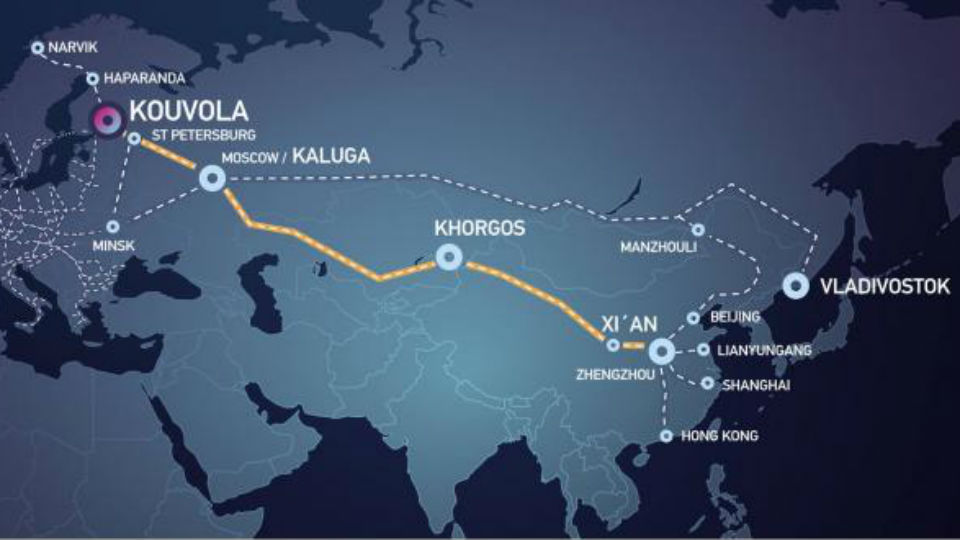 Another push for the Eurasian link via Kouvola is expected with the transport of fresh salmon from Norway to China, a service that is currently being planned to run via Kouvola. According to an agreement signed in June 2018, the Xi’an-Kouvola link will eventually run to the Norwegian port of Narvik via Haparanda, the Finnish-Swedish border crossing. With the opening up of Russian territory for the transit of fresh products, this is a market waiting to be exploited, the parties involved believe.

“Now we can move overland we must realise the shipment of salmon by train”, says Ola Strand, CEO of Norway BluWrap. His company has developed a way to do this. With a special packaging the shelf life of fish is doubled to 30 days. “For pork the results are even more astonishing: the meat stays good for 90 days. With this technology these products can easily be shipped to China by train.”

Although Kouvola thinks big, its surroundings are inhabited with potential. Around 100 logistics companies operate in the Tehola-Kullasvaara logistics area, and nearly 200 in the Kouvola region. It currently handles 2 million tonnes of freight per year. As soon as 2023, a new logistics area will be operative as part of the new terminal, and more space has been reserved for businesses in the area.

Simo Päivinen, Development Director at Kouvola Innovation Oy, will speak about the potential of Kouvola as a regional hub at the European Silk Road Summit. This conference takes place on 26 and 27 November in Venlo, the Netherlands. His presentation is part of the session about European hubs on the New Silk Road. Have a look at the programme or register.